LUCY ALVES - THE MUSICAL GENIUS FROM THE NORTHEAST OF BRAZIL 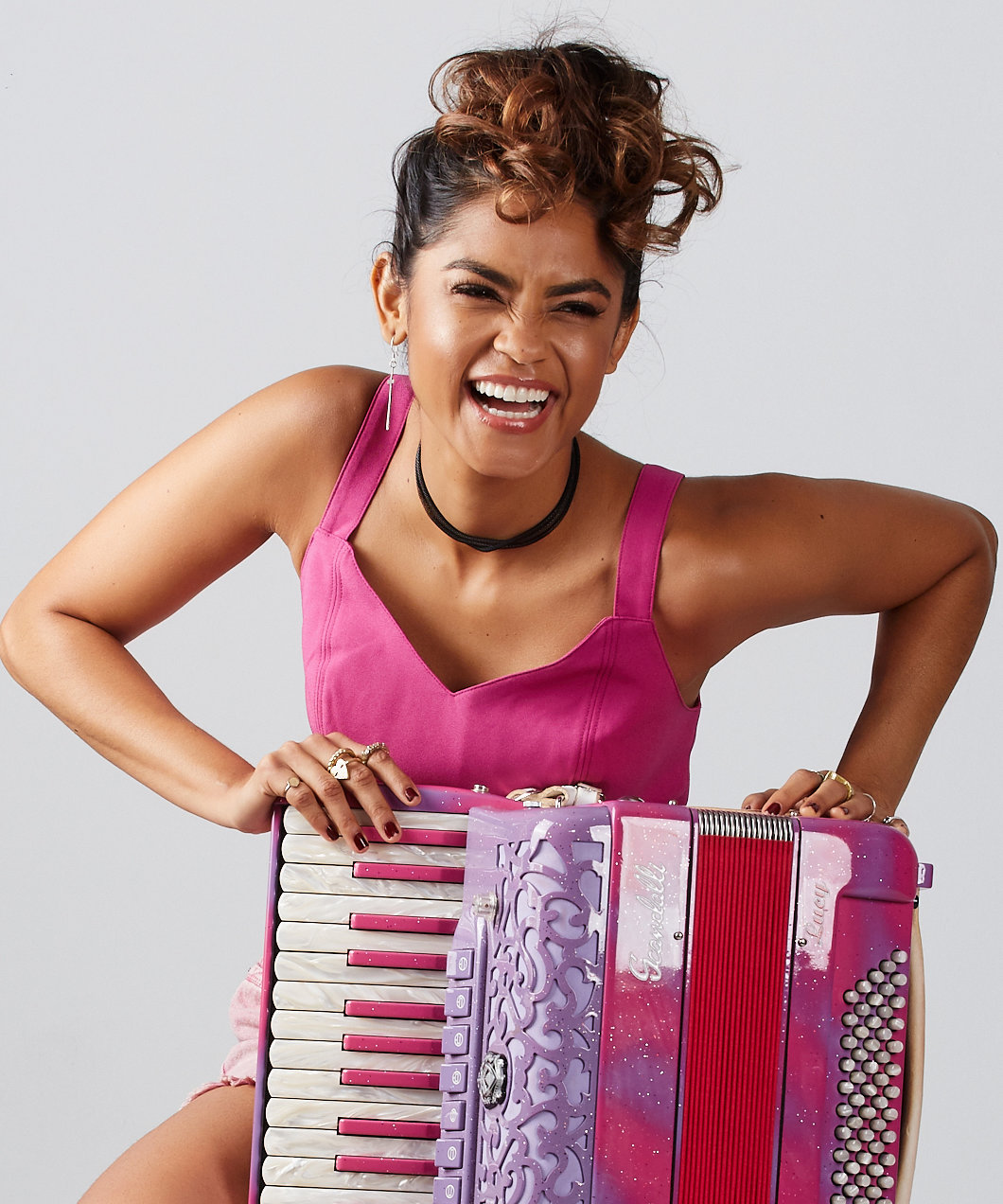 Lucyane Pereira Alves was born in 1986 in João Pessoa, state capital of Paraíba, in the Northeast of Brazil. She adopted the stage name of Lucy Alves and today she can look back to a successful career as a composer, singer, multi-instrumentalist, presenter, and actress. Lucy grew up in a family with a highly musical atmosphere. Her great-grandfather used to play the accordion with eight bass notes and her parents, both musicians, encouraged her to play an instrument at an early age, the violin. When she was four years old, she came into the world of music through the Formiguinhas Project and later as a violinist with the Paraíba Children's Orchestra. She became a soloist with the Symphony Orchestras of Paraíba and Recife as well as the João Pessoa Chamber Orchestra. She studied violin at the Paraíba Federal University College of Music where she graduated. Because of her natural talent and untiring engagement Lucy learned to play several musical instruments, such as mandolin, bass, guitar, keyboard, and of course the accordion that nowadays goes along with her on all her travels and performances.

At the beginning of her career, Lucy played with the Clã Brasil group from Itaporanga, a small town in the interior of Paraiba State. Clã Brasil was formed in the early 2000 by joining the musical talents of the three sisters Lucyane, Laryssa and Lizete, her mother Maria José and her father José Hilton, as well as the participation of Fabiane and Francisco, daughter and son of a friend of her father's. With strong influence from the great names in the traditional music of the northeastern region of Brazil such as Luiz Gonzaga, Jackson do Pandeiro, Antonio Barros, Jacinto Silva, Gordurinha, and Elina Julião, they released their first CD, entitled "A Sedução do Clã Brasil" in 2002. The following year, they launched "De Onde Vem o Baião", with a title song composed by Gilberto Gil, one of the renowned musicians in Brazil and also recognized internationally. The album also contains a composition by Chico Cesar entitled "Paraíba Meu Amor". In 2004, the group produced a live performance CD "Forró Pé-de-Serra ao Vivo" with new recordings of successful titles like "Asa Branca", "Paraíba", "ABC do Sertão", and "Sabiá" by Luiz Gonzaga. A second live performance CD was recorded in 2006, featuring music by various composers, among them Sivuca, and a DVD was also issued later in the year. 2009 brought the launch of a CD/DVD "Clã Brasil Canta Dominguinhos", encompassing exclusively the music of Dominguinhos. In 2010, specialists acclaimed Clã Brasil the most outstanding success in Brazil.
Over time, Lucy attracted the attention of the great names in the Brazilian music scene, through partnerships on stage and in recording studios. She performed in recordings with Dominginhos, Marines, Pinto do Acordeon, Sivuca, the Quinteto Violado, and Oswaldinho do Acordeon. Through her appearences with Alceu Valença's Band, she participated in shows all over Brazil and in projects like “Pixinguinha” with the Chorisso Group as well as the “Festival Internacional da Sanfona”.

In 2013, Lucy 's participation in a TV Globo contest "The Voice Brasil", a programme that was watched by millions of people throughout Brazil, achieved a major breakthrough in her career. Her good taste in selecting the best songs for her performances was decisive for her success in the The Voice Brasil contest that turned out to be an important milestone in her brilliant career. The audience was singing along with her when she interpreted “De Volta Pro Aconchego” and “Isso Aqui Tá Bom Demais”, two titles by Dominguinhos. She was also accompanied by the audience in “Disparada” by Geraldo Vandré and “Segue o Seco” by Carlinhos Brown, who was present as one of the judges. Lucy's interpretation of Moraes Moreira's famous song, “Festa do Interior”, also fascinated the public. The renowned Brazilian singer Gal Costa interpreted this song at several international festivals. Lucy's performance in the semifinal of the contest without an instrument highlighted her wonderful voice, in timbre and expression comparable to the best and most famous of Brazilian musicians like Claudia Leitte, who was also a judge present at the contest. Furthermore, Lucy's elegance and her cheerful, but discrete personality impressed the judges and the audience who voted for her enthusiastically.

Following this great success, Lucy was honoured in 2014 during a great show in Joao Pessoa by the Municipality. Later on, she moved to Rio de Janeiro in order to be closer to the centre of the Brazilian cultural life. Carnival in Rio de Janeiro is a major cultural attraction in this city, where Lucy soon had a special participation in the performance of Zé Katimba, a well-known composer of samba-stories for carnival parades. In 2016, he was victorious for the Imperatriz Leopoldinense Samba School. Lucy was invited to sing the samba song of that year together with Zezé di Camargo & Luciano for the official CD of the Rio de Janeiro Samba Schools as well as to participate at the venue of Rio de Janeiro's glamorous carnival parade.

After arriving in Rio de Janeiro, Lucy started performing in dozens of shows throughout Brazil, always returning to her home state of Paraíba to visit her family and her friends. She also was part of the cast in the musical "Nuvem de Lagrimas", with music composed by Chitãozinho e Xororô, in the interior of São Paulo State. Highlights among her shows were the one in Caruarú in Pernambuco State with a large enthusiastic audience in 2018 and the one for the occasion of the 40th anniversary of the career of celebrated singer Elba Ramalho who also comes from Lucy's home state and who introduced regional Forró and Frevo music at international festivals. Lucy has known Elba Ramalho since childhood. She also performed with Gilberto Gil and in a show with the Singing Father Fabio de Melo. In 2019, she delivered a brilliant performance as a presenter in a TV Globo programme "Só Toca Top" together with singer Wesley Safadão. In 2019, Lucy released a new CD "Mexe Mexe" with her own lyrics: pop sound with a sensual touch, a radical departure from her usual Forró music.

In 2015, she started at TV Globo as an actress in the miniseries "Dois Irmãos", and then she received an offer from the director of the telenovela "Velho Chico" for the role of "Luzia Rosa dos Anjos". Lucy delivered an impressive performance on the scene, being perfectly up to the famous actor Domingos Montagner who later died swimming in the São Francisco River during a recording break. In 2017, Lucy played the role of the housemaid "Maria Eunice" in another telenovela "Tempo de Amar" and in 2019 she participated as "Lurdes" in "Amor de Mãe".

Lucy has already become used to give interviews to newspapers and well-known TV programmes. Some of her highlights are the interviews in 2015 to Jo Soares, in 2017 at the Amaury Jr. show and in 2019 in fhe programme of Luciana Gimenez, where she played several musical instruments.

The artist had many plans for 2020, among them the release of “Live Session”, an EP with five songs including new recordings and a so far unreleased composition. Lucy sometimes calls herself a "walking metamorphosis", and It was all meant to happen; she could have landed a part in another telenovela or film, or she could have got contracts for shows and advertising. But the impact of Coronavirus was devastating in Brazil and for Rio de Janeiro, and that changed her life like so many others'. Staying at home, she does not spend a single day without music. After her breakfast with tapioca, a regional meal from the Northeast, she gets busy playing all her instruments, rehearsing new music and sending out recordings through the social media.

Lucy wants to influence people in a positive way and help to represent the Northeast of Brazil. More than earning much money, she wants to be a plural artist, and she believes that her mission is to take her music to all the corners of Brazil and then to the whole world.

Even with the most beautiful and positive dreams, Lucy could not have imagined she would be so successful across her artistic spectrum in 2022. Her continued creativity, good judgement of projects and well-organised lifestyle have been fully rewarded.

Millions of people watched TV Globo's "The Masked Singer Brasil" shows in which lioness Lucy danced, and the guesswork came to an end when she lifted her mask at the end.

For the São João season, Lucy prepared her new composition "Perigosissima", a song with a dance rhythm that she performed with a dance troupe in a Tour around Brazil. A CD was also released - a huge success.

She was also involved on Netflix as an actress in the series "Only if it's for love".

Becoming the lead actress in TV Globo's prime time TV Serie "Travessia" made her known throughout Brazil. These TV Series are also sold to other countries.

To top it off, Lucy was invited to the annual Christmas Show of Roberto Carlos, revered in Brazil as the King of Music, where he honoured her with worthy words - he spoke of Lucy's artistic quality, as a singer, instrumentalist, composer and even as an actress - all in one person! Lucy could allready realize her dream to be a plural artist.